When the February challenge was announced as “show us your sewing room”, I snorted at the “room” bit. My sewing room is a 4×4 foot corner of my small apartment attached to the kitchen. I was trying to figure out how to take a panoramic picture to fit it all in, but… don’t need to, it all fit in one shot! Here’s a diagram I’m calling The Anatomy of a Tiny Sewing Space: 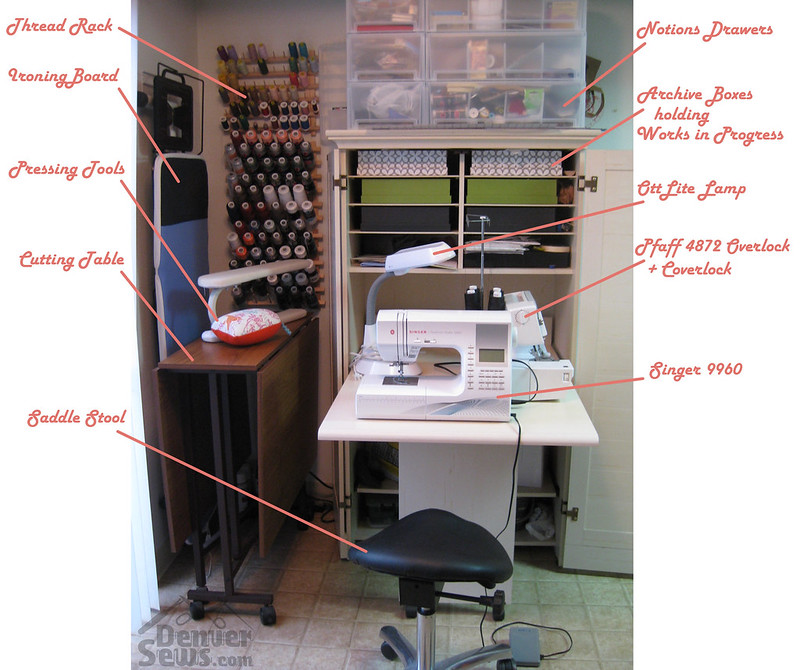 The biggest hassle with trying to sew in a small space is that I can’t have everything out at once. My sewing cabinet is folded out in this picture and the cutting table is folded up to the left. When I want to cut… time to fold up the sewing table and unfold the cutting table. Actually, sometimes I just wheel the cutting table into the living room and block everyone’s view of the TV. Priorities, right?

The sewing cabinet is an interesting piece of furniture that was titled a “craft armoire“. (It’s gone up in price a lot since I bought it! Guess the price of particle board is on the up and up.) The table both folds out and extends on a rail out of the cabinet. There’s also a nice little power strip built into the table to plug your machines into. 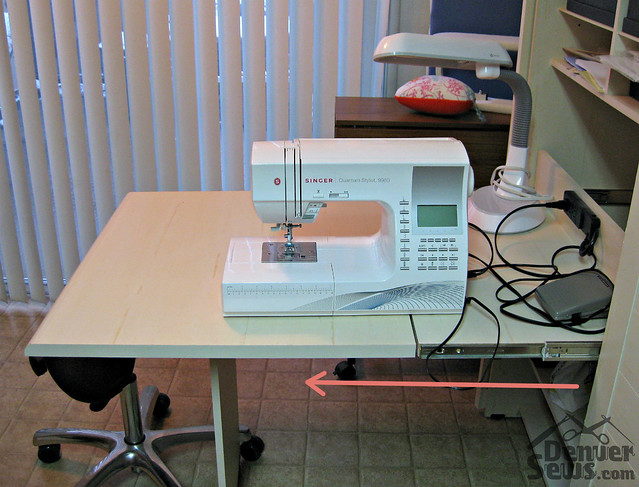 There’s also an extra pull out tray on the bottom that you’re supposed to be able to store another machine on. It’s such a hassle to crawl under the table that I just have the dust cover down there. 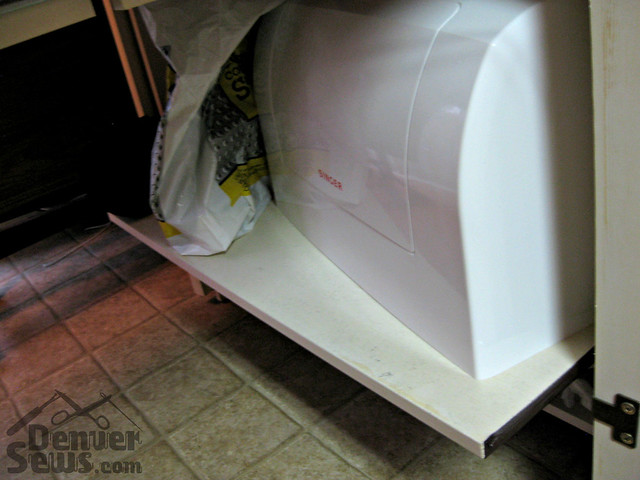 Here’s what the “craft armoire” looks like folded up. 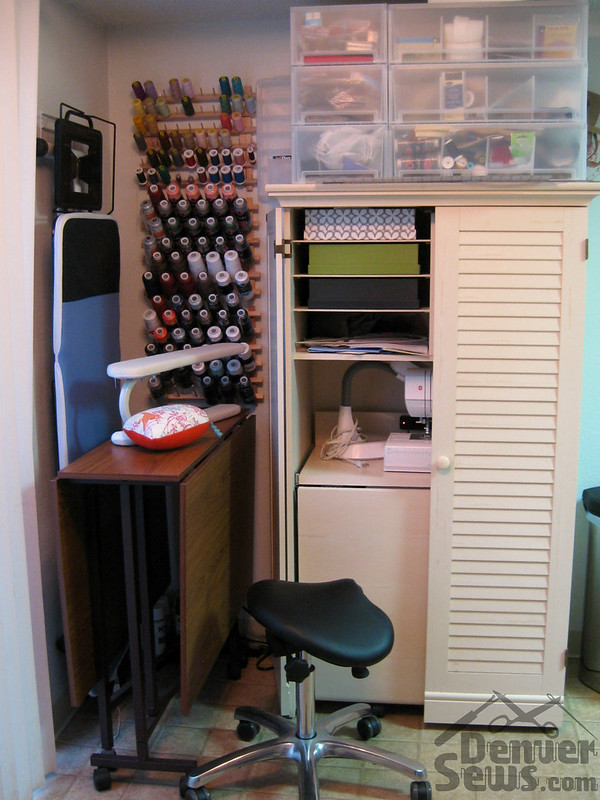 My slightly odd looking seating choice is a saddle chair I bought on Amazon. It’s the same kind of seat that dentists sit on to lean over patients, and I like that it feel ergonomic when I’m leaning in with my face right up against my machine as I’m prone to doing. It did take some getting used to… kind of like riding a bicycle for a long time, it becomes more comfortable the more you use it. I often set up my ironing board directly behind the stool and then I can do a little crab shuffle over to it without getting up. It makes for some speedy sewing. 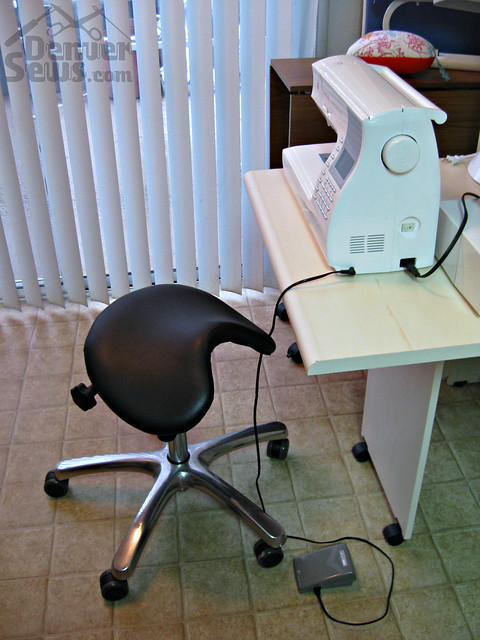 Speaking of my ironing board, it’s an AWESOME Reliable brand rectangular ironing board. It’s definitely on the pricey side, but since it’s rectangular and almost 60″ wide you can make quick work of pressing yardages of fabric before cutting. Totally worth the investment. My fold-out standing height cutting table is a cheap “Sullivan’s Hobby Table” that you can buy at any Hancock or Joann’s. It’s not great – the hinges are cheap and the leaves never sit flush against the middle piece when folded out. Plus the legs won’t clip into the things are that supposed to hold them folded out so if you try to drag it around the room it tends to fold back up and come crashing down if you’re not careful. I wouldn’t recommend it, but I needed something that would fold down small and it’s all I could find! When I have it folded out I can fit two of the largest rotary cutting mats on it which does give me a pretty big cutting area. 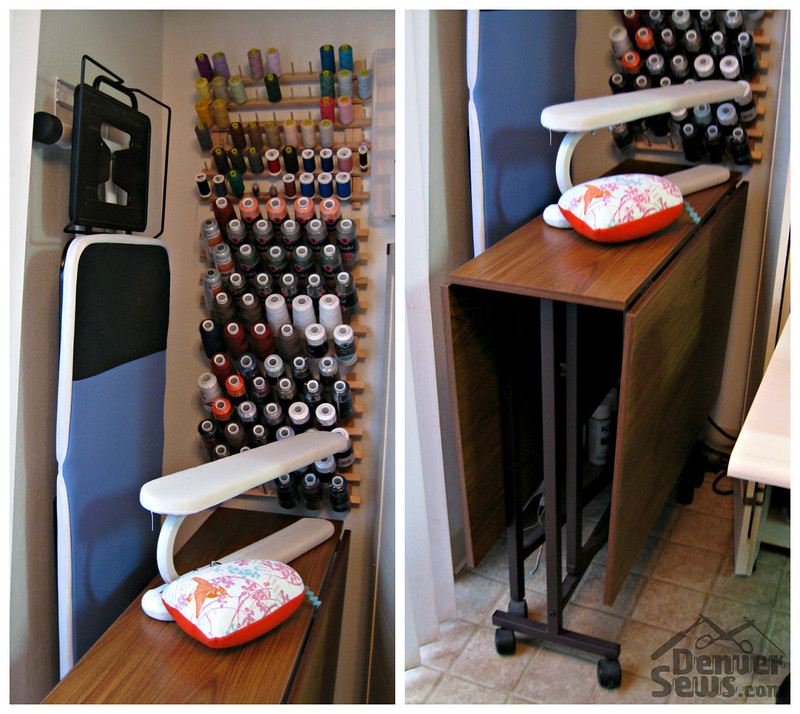 The boxes are archival boxes from the Container Store, mostly just purchased because they were the right size for the shelves in my armoire. Since it’s such a hassle to get my cutting table out, I’ve been trying to do things in batches. I’ll cut a bunch of things out and then store them in these boxes until I get to them. Sadly my unfinished projects are piling up and the boxes are all full of things I don’t really want to work on. Maybe someone will recognize this jacket… I think I started it at the Sew-In in July! Eeesh. 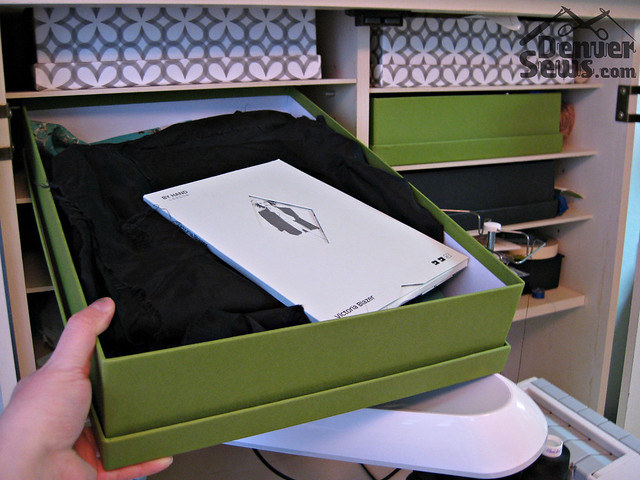 Somewhere I read that if you don’t have much storage space you should go vertical, so I stacked some drawers on top of my armoire all the way to the ceiling. Maximum storage height accomplished! The drawers are Kupol plastic drawers from Ikea. WAY cheaper than anything at the Container Store, and they have these nice little dividers inside you can use to organize things. I can’t actually see inside the drawers considering they are above my head, but I can pull the drawers out and lift them down to get at my notions. 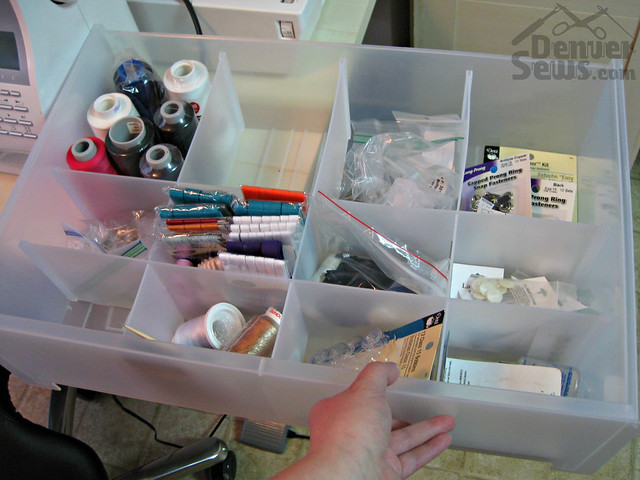 And, probably the most important part… my sewing machine! It’s a Singer 9960 that I purchased on Amazon in 2012, according to my purchase history. When I was looking at upgrading from my $79 White, I went and test drove a bunch of machines at local dealers and wasn’t that impressed with the features on the low end machines (which still started around $1K). For $350 this machine has a lot of features – it has a drop in bobbin, you can configure it to always stop with the needle down, there’s a button to pull both threads to the bottom and cut them, and you can set it up to stitch in place at the beginning and end of a line of stitching to prevent unraveling. The buttonhole stitch is very reliable (unlike my old machine which made me terrified of buttonholes), and there’s a bunch of stretch stitches which I’ve been getting a lot of use out of. It also came with 18 feet, and I like that additional feet are ~$10 instead of the outrageous prices they charge for feet with other brands. It also sews through layers of thick fabrics like a champ. Honestly I’m surprised how good it is for a Singer… I know the cheap Singers they sell at JoAnn’s get terrible reviews, but I researched this one pretty well before I bought it online and I have no regrets. 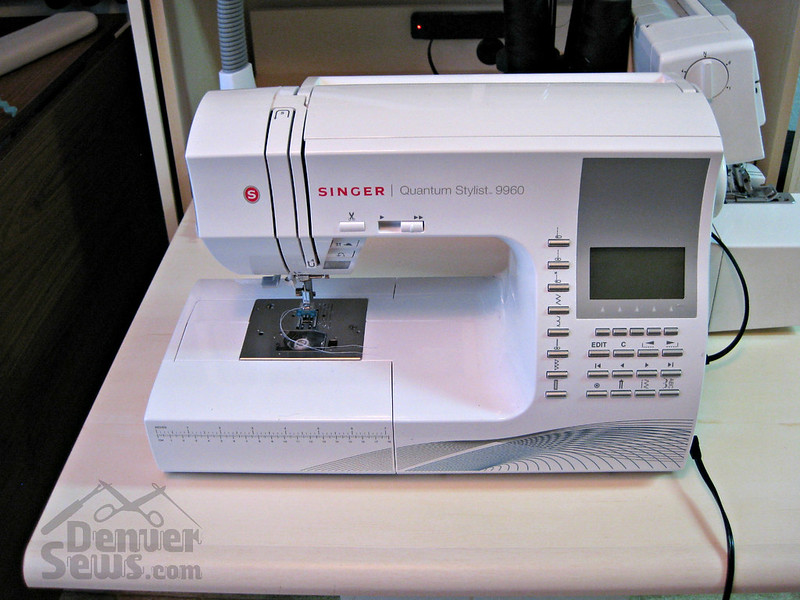 My serger / coverlock machine is a Pfaff 4872 which was purchased on a whim with 60 seconds to spare on a eBay auction with no other bids. I have a love/hate relationship with it. It has a lot of features for the price I paid for it. It was probably a top of the line machine when it was new. But when I see the fancy new sergers with air threading, I get a little jealous. The looper on this thing will often un-thread itself just to make me angry, and if I don’t unthread the whole thing and rethread in the proper order it will just keep doing it again and again. I try to think of it as character building. 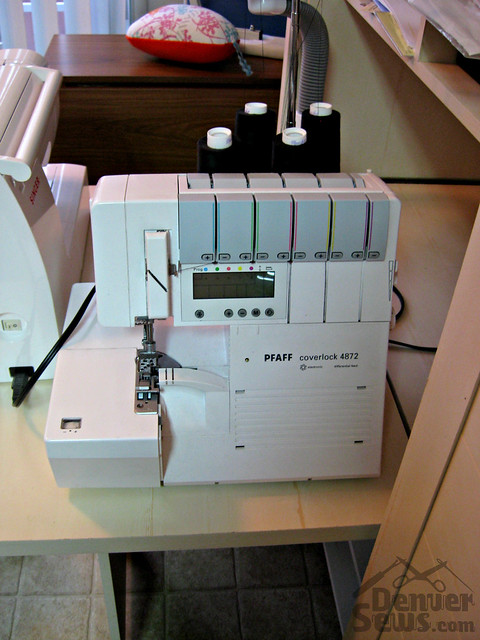 Honestly I’m surprised how tidy this whole setup looks when I photographed it. Usually it’s a frightening mess, but one of the upsides of having a small space is that it’s also a small area to clean when you need to. Of course I didn’t picture the fabric I have shoved in drawers and in the closet in my bedroom or the bookshelf half taken over by patterns and Burda magazines in my office. Sewing clutter is terribly contagious!