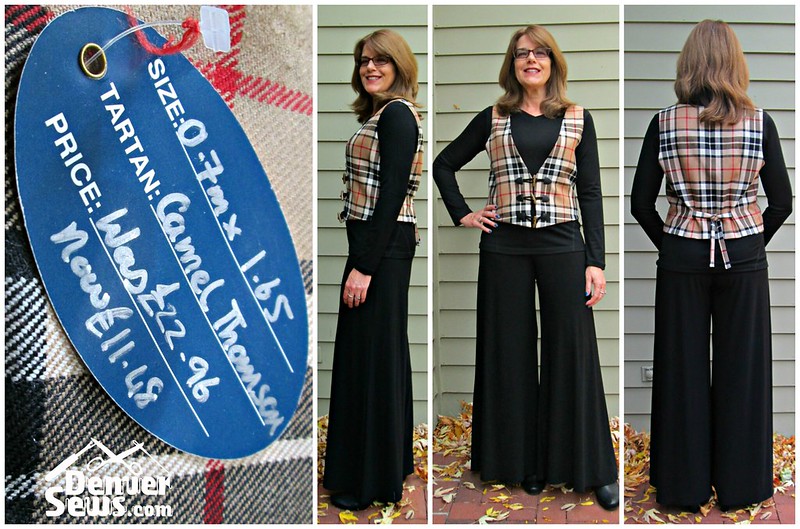 For our first group sewing challenge at DenverSews, Jamie challenged us to use a fabric we’d been holding on to for a long time. Wow, I had so much leeway with this challenge! Almost all of my fabric has been in my stash for a very long time. In order to narrow the field, I focused on making sure the fabric I chose was something I was absolutely terrified to use. For me that meant choosing an expensive fabric which also had sentimental value. Most of my fabric stash consists of cheap thrift store fabrics, and I’m not afraid to use those – if I mess up with thrift store fabric, it can easily be replaced.

After making fear the focus of the challenge, my choice was clear. I’d use the Camel Thomson Tartan wool I bought when I visited Scotland many years ago. My husband and I have vacationed in Scotland twice, and probably won’t indulge in a third trip. So my Tartan wool is irreplaceable! This fabric reminds me of our wonderful United Kingdom trips whenever I see it. The sentimental and cherished aspects of this wool made it impossible for me to cut into it for nearly 10 years – what if the garment I made from it didn’t turn out?

I had several additional reasons for dragging my feet on using this fabric. First, it’s plaid. Umm, I have no idea how to match plaid when cutting out a pattern! I’ve never attempted to sew with fabric that absolutely had to be pattern matched. Second, it’s wool, and wool makes me really itchy. I avoid it like the plague. So that meant I’d have to completely line whatever I garment I made, and I have very little experience in sewing linings. But hey, that’s why it’s called a challenge, right? It’s meant to be challenging!

Because I entered two sewing contests in October and took two out-of-town trips, I had less time than I would have liked to work on our first group challenge. For those reasons I chose to make view A from New Look 6036, a simple vest pattern. It turns out there are many styles that won’t work with plaid fabric. For instance,  you shouldn’t use plaid if your pattern includes princess seams. So this pattern choice was a necessary one, the style lines of the vest worked with plaid, and I didn’t have enough yardage to make anything larger – extra yardage is required to match plaid.

I didn’t feel I had enough time to make a muslin and figure out how to match the plaid on my vest. Recalling how large my last New Look garment turned out, I chose one size less than my measurements called for and hoped the size 12 would fit. This was the “jump“, or leap of faith, that Jamie wrote about in her post on Monday. Having faith that I could successfully sew plaid was another key to actually using this treasured fabric.

Next I read a tutorial on how to match plaid, but I ended up not following the instructions exactly. The tutorial advised cutting each pattern piece separately, instead of doubling the fabric to cut two of the same pattern piece. The single layer technique was suggested to insure the pattern placement on the fabric was exact – so the plaid lined up on the entire garment. (The exception was the shoulder seams, where you can’t and don’t plaid match.) But this method proved too difficult for me – my eyes found it impossible to discern identical points on my busy tartan.

So I folded the wool with the plaid design as closely matched on both sides as possible and pinned the folded fabric together at chosen points, making sure each pin pierced the wool in the same spot on both sides. With the tartan design precisely pinned I could cut both vest fronts at the same time, without having to strain my eyes to find the identical spot in the tartan design for each front. But would this solution actually work? Yes!!! When I sewed the vest together the plaid matched! I’m thrilled that my vest turned out so well, especially considering all my fears about sewing with plaid. Thanks, Jamie, for this great group challenge!