Unfortunately, most of what you may have learned in school about Betsy Ross and the creation of the American flag is most likely myth. Here are a few facts about Betsy Ross one of American’s most honored seamstresses.  (For more fascinating history check out the Wiki page “Betsy Ross Flag”)

• Elizabeth “Betsy” Griscom was born on January 1, 1752, and lived in Philadelphia for most of her life.
• She was number eight of seventeen children!
• Ross was raised as a Quaker.
• She learned sewing as a child and later moved into upholstery, meeting her first husband, John Ross.
• John Ross was an Episcopalian. She had to elope and was kicked out of her church.
• They ran away to New Jersey when Betsy was 21 years old.
• She ran the sewing/upholstery business on her own after Ross was killed by an explosion.
• She supported her family but sewing uniforms and making quilts for the military.
• There is proof that she did make flags for the Pennsylvania State Navy.
• She continued to run her upholstery business while making flags for the U.S. until the late 1820s.
• Betsy Ross was the mother of 7 daughters and had 3 husbands.
• She died on January 30, 1836 and now is residing in Mt Moriah Cemetery in Philadelphia.

The legend is that George Washington visited Betsy  in Philadelphia with a sketch of a  flag that he wanted made. Apparently her idea was for a five pointed star rather than a six pointed one. She showed George the technique and he liked it, and then she got busy. There are all sorts of lofty descriptions of their meeting but sadly there is no definitive proof that they even met.

The truth is that there is no solid evidence who made the first flag, but there is general agreement that Francis Hopkinson designed the “Betsy Ross” flag.  Maybe it was designed by a man, but without a doubt, whether it was in fact Betsy Ross or some unsung, long forgotten woman, this work was done by a woman. My favorite photo of the ‘birth’ of the American flag is the one below. It represents so much of what I love about sewing: the very act of creating, community and fellowship with others who love the same thing that I do. God bless sewing! 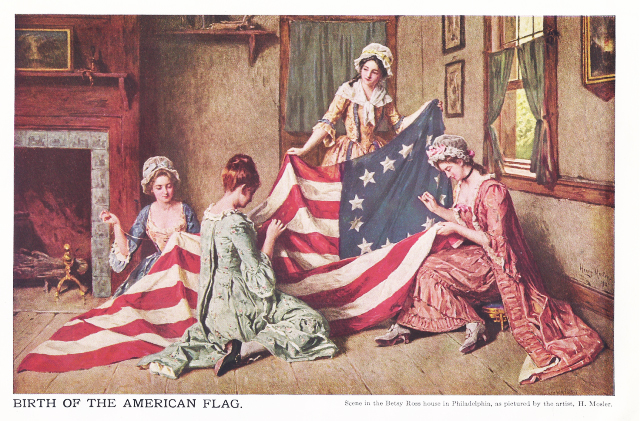 For more fascinating facts on Betsy Ross go to http://www.revolutionary-war-and-beyond.com/betsy-ross-facts.html