The Loss Of My Mighty Zeus

Zeus walked into my life about seven years ago. I was not excited about having a pet of any kind. I knew that I would eventually be the one that was going to take care of it. I hadn’t taken care of a dog or cat in years, and really wasn’t very thrilled about the prospect.

Flash forward to today and I can barely keep the tears in while writing this post. I loved our time together, he brought more joy to my life that I ever thought possible.  So, indulge me a bit here, and I’ll tell you about my mighty Zeus (aka Zeusy).

Zeus would usually meet me at the door when I got home from work. As kids get older you find this a great source of joy. You feel loved and needed in a very blatant, in-your-face way. 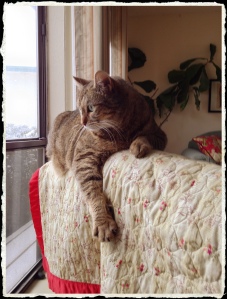 Often times I would run up to the bedroom and flop on the bed. Zeus would hop up and sit on me and then we’d have a little afternoon cat nap.

Being a good craft kitty he would always hang out in my sewing room, at the iron, under my table, on my table anywhere. 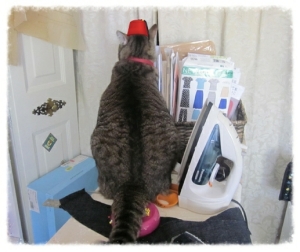 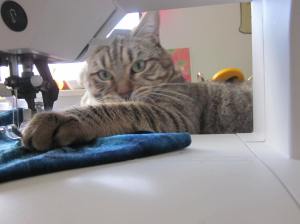 Of course he liked to sit in boxes or anything, including oddly the fruit bowl. 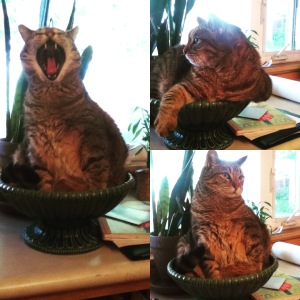 He won a company wide pet photo contest with the photo below. He won 50 bucks to PetCo. 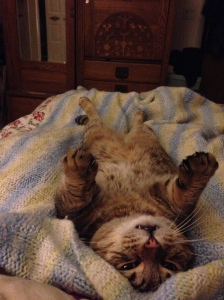 He was a curmudgeon, a true grumpy cat but a lovable one.

He loved food. He liked Cheetos and swear to God, lasagna. He was also a big scaredy cat, and was afraid of his own shadow. He got in  a few fights over the years but he was never the aggressor. We would let him go outside but he didn’t roam much, and there were many days and weeks especially in the winter when he wouldn’t bother going out at all. If he went out at night I would be sure to call for him with a shake of the food can and I could see his tubby body bobbing up the street.

I recently got another cat. His name is Milo. Blame it on Instagram but, I saw so many cute pictures of cats commingling together, peacefully that I thought why not, let’s get another cat! Alas, this was not a good relationship. Milo attacked Zeus, sending him to the vet with a big gash on his back.  Boundaries were made, lines were drawn. Zeus had a downstairs bedroom and Milo had mine. Zeus would have the run of the house at night and Milo during the day.

We kept working on getting the two to at least tolerate each other. We followed helpful advice from others who had two cats.  We even put little booties on Milo.

Unfortunately, we didn’t get much more time to get those two to be tolerate each other. Two days before Thanksgiving my husband unbeknownst to me let out Zeus. He forgot to call him in before bed and that was the last time he was seen. We put up signs, we walked the neighborhood, called shelters. We back up to open space, you can drawn you own conclusions.

I can’t stand the thought of something bad happening. So, I tell myself Zeus had enough and first chance he got fled into the night. Crawled into someone’s open garage (which he was want to do) and in the morning surprised a nice cat lady while she was getting in her car to go to work that day. Seeing that the cat didn’t have any tags decided to take him in.  Now he’s sitting on someone else bladder at three in the morning.

And, that’s the ending I’m sticking with. Goodnight Sweet Zeus! 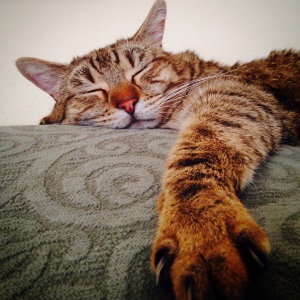