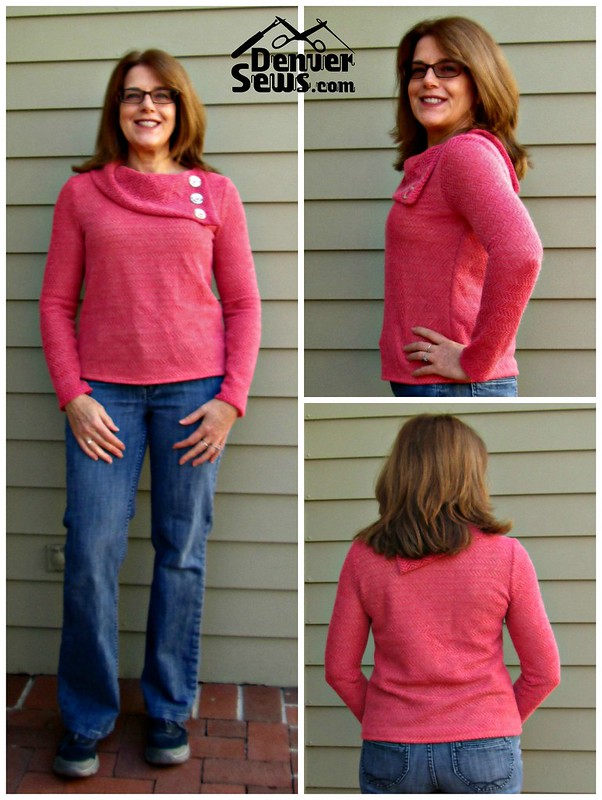 For several weeks I’ve been in a terrible sewing slump. My sewing mojo’s been MIA and every project I’ve attempted has turned out badly. So I decided to make some quick and easy winter tops to try to turn the tide. I looked through my pattern stash and pulled out the top patterns that struck me as the easiest to sew.

The first pattern I chose is McCall’s 6796, which is currently a contender as one of the “Best Patterns Of The Year 2014” on Pattern Review. 6796 has 38 reviews on Pattern Review and only one reviewer said the pattern didn’t work for her. I figured with such stellar raves this pattern couldn’t possibly fail me. Even more reassuring: many reviewers said the top was easy to sew and great for beginners. An easy to sew AND highly recommended pattern, that’s exactly what I was looking for to revive my sewing confidence!

After checking the length of the pattern I saw it would be too long on my short torso. So I shortened the pattern by a whopping 2+1/2 inches. A knit top stretched across my ample rear end is not a good look for me! I wanted to make sure the top ended above the widest part of my figure. Though the size 14 was closest to my measurements, I cut a size 12 due to my past experiences with McCall’s patterns fitting too loosely on my upper body.

Strangely, I had almost the exact same fabric (purchased for a dollar at a thrift store) in my stash as is shown on the model pictured on the pattern envelope. The only difference (I thought) was that my knit was pink and the model’s sweater is peach. The lacy knit looks great on the model, but I decided I’d better line the body of my knit with nude knit interlock as I’m neither as young, as thin, or as lovely as the model. Having figured that out, I plowed ahead and failed to notice that MY fabric, while it looked just like the knit used on the pattern envelope, was NOT a stretch knit – which is a pattern requirement for this top. Oops! So as it turns out a non-stretch knit CAN be used for this pattern – if you’re an A cup, and if you don’t mind struggling with getting the d#*n thing on and off. And also if you don’t plan on moving your arms much while wearing it…

So sadly, this highly recommended pattern didn’t break my sewing slump. I can’t say that a top that fits me like a straightjacket is a success. Of course the sweater would have turned out fine if I had followed the instructions and used a stretch knit. So my bad. As it is its wearable I guess, but just barely, and maybe just for blog photos? On the positive side, I used up some more of my vast fabric stash and I even found vintage buttons in my stash that exactly matched the pink knit (which I stacked on top of discs from the stash that matched the lining). Who says hoarding never pays off?

After such a surefire pattern being a fail for me, what are the odds of my next project breaking my sewing slump? The pessimist in me says “slim to none”, the optimist in me says “there’s nowhere to go but up from here”. Stay tuned to find out which sentiment prevails on my next sewing mojo revival attempt!