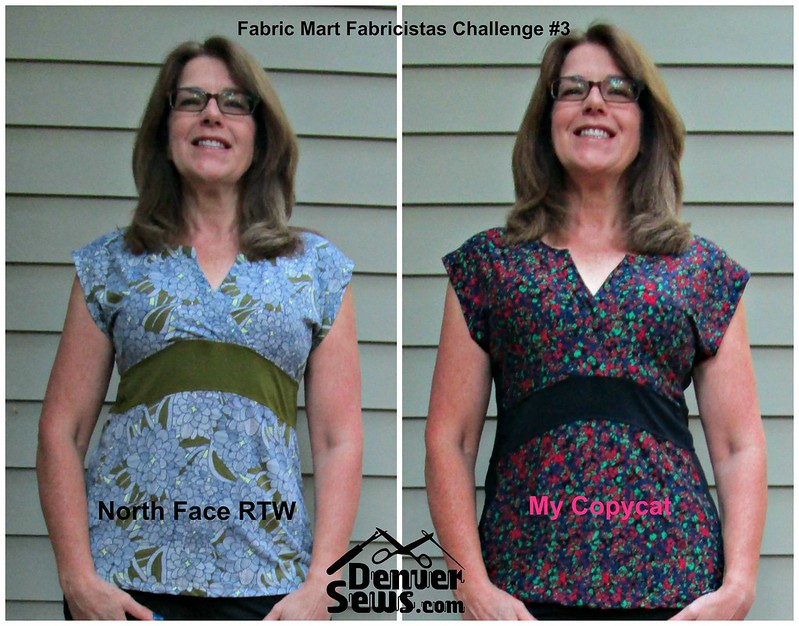 The Fabric Mart Fabricistas are currently running their second Fashion Sewing Contest! They’ve included a “play along” flickr page where the sewing public can post photos of their sew-along entries. I decided to give it a whirl!

The third and current challenge in the contest is to duplicate a favorite ready to wear (RTW) garment from your closet. The contestants must create their own pattern using the RTW garment. This was smart thinking on the part of Fabric Mart – by asking you to recreate your favorite RTW garment they’ve made it more difficult to mock-up a pattern. If it wasn’t your favorite garment you could just cut apart the seams, draw around the pieces and viola, pattern made! Believe me, making a pattern from an already sewn up garment isn’t as easy as you’d think!

Fortunately the Fabricistas included a YouTube tutorial from Nancy Zieman for reference. Unfortunately my favorite RTW garment is a pull-on North Face top with 16 separate pieces. It wasn’t possible for me to open out the top and trace the various sections in single layers as Nancy Zieman advised. So my pattern drafting technique was basically equal parts measuring and guessing. As per the tutorial, I flattened out my RTW garment as much as possible on top of my pattern paper, then traced all the seams with a serrated edge tracing wheel, piercing tiny holes in the paper. This created my pattern sewing lines. Then I added 1/2″ for seam allowances to all the pieces and cut out my pattern.

Unfortunately due to the double layer of fabric (because this pull-on top couldn’t be opened out) the holes didn’t pierce the paper in spots – this is where the guessing came in. I finally measured each piece on the RTW top and made some adjustments to my pattern.

I was relieved at this point because I thought making the pattern would be the most difficult part of the process, but the sewing took forever! The serged seams came out fine, but every seam on all 16 pieces of the original top had double top stitching. And once I top stitched the first seam I saw I was getting that dreaded wavy effect that can make sewing knits difficult.

Normally I’d leave off the top stitching if it looked wonky, but in order to be true to making a duplicate of the original top, I couldn’t eliminate the top stitching – I had to figure the problem out. I ended up cutting and ironing a strip of tear away stabilizer to every single seam prior to top stitching. This alleviated the wavy seam effect. But in the end tearing off all the stabilizer took the most time of all – it shredded into hundreds of tiny pieces and was very difficult to remove! 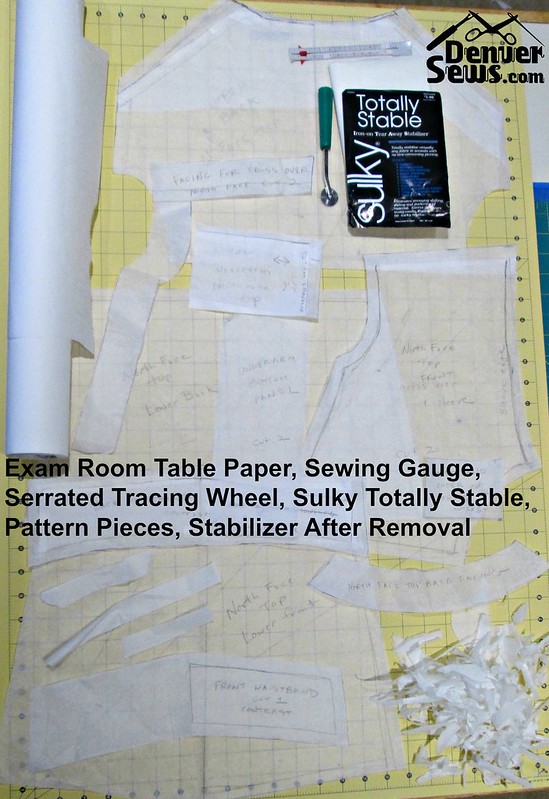 For my first attempt at making a pattern from RTW I think the top came out pretty well. It’s not absolutely perfect, but it’s not too bad considering it’s the first time I’ve ever sewn without a commercial pattern or instructions. It was also quite a rush job since I didn’t see the third challenge until Sunday and the deadline for submission is today! If you’re interested in sewing along, there are 3 more challenges (with prizes!) in the Fabric Mart 2014 Fashion Sewing Challenge. The 4th challenge will be revealed this Friday, why not challenge yourself and sew along!