Q is for Quilt 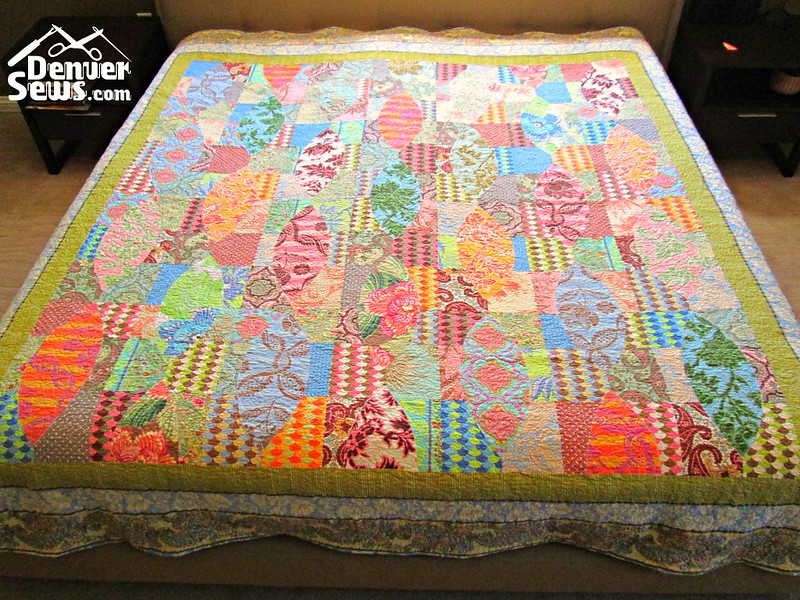 series, the letter Q, I decided to complete my unfinished quilt. About 10 years ago (when I was making quilt tops rather than garments) I signed up for a quilt class at a Chicago sewing studio. After struggling through sewing two quilt tops on my own, I hoped that the class would help me improve my patchwork technique. The students had their choice of two designs: a log cabin quilt or the Amy Butler Charm quilt. Since my first quilt was in the log cabin style, I chose to make the appliqued Amy Butler Charm quilt. The pattern for the Amy Butler Charm quilt was just a grouping of simple patchwork rectangles with “football” shapes appliqued on top. I knew the rectangles wouldn’t be difficult to cut or sew, and hopefully the instructor could teach me the art of applique, something I’d never tried before, but was eager to learn.

I finished my Amy Butler quilt top shortly after the class concluded and mailed the top off to Wisconsin to be long-arm quilted. I had already employed the same woman to quilt my first two patchwork tops, but for this quilt I wanted a deluxe stitching pattern, which was very expensive. On my previous quilts I had chosen the least expensive quilting design she offered. Since my first two quilts were “beginner” quilts they were nothing I was really proud of. I chose the deluxe stitching for my Charm quilt because I had labored long and hard to match up its countless mitered corners 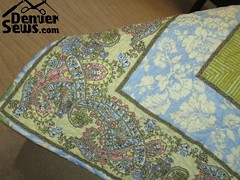 and I wanted the quilting stitch pattern to be very detailed also.

But then the cost of the deluxe stitching caused my frugal nature to kick in. I decided to opt out of having the quilt bound by my quilter. Outsourcing the binding was an additional cost, which I had already paid for on my two other quilts. I assumed that binding a quilt was simple sewing and I could easily do it myself, right?

Wow, talk about kidding oneself! I hate hand sewing! And I have a procrastination problem. When exactly did I think I would be putting in the multiple hours it would take to hand sew a quilt binding? Well, the answer to the when question turned out to be: OVER 10 YEARS LATER. Sometimes being frugal really bites!

Having never bound a quilt I watched a few you tube videos beforehand to learn how to cut my binding strips on the bias. I figured all quilt bindings had to be bias cut, but I found out that because my quilt only had straight edges I didn’t need to bias cut the binding strips. Bias binding is really only necessary when binding around curves.

This was helpful information since bias cuts need to be handled gently or they stretch out of shape. My hand sewing technique would never be considered gentle, it’s more like this, with me wrestling the needle and thread to the bitter end. I would definitely be stretching a bias cut binding out of shape! Luckily I found this you tube video, which included all the steps from start to finish to bind the quilt. It really saved the day. The hand sewing for the binding took me seven hours but I completed it! Whew and hurrah!