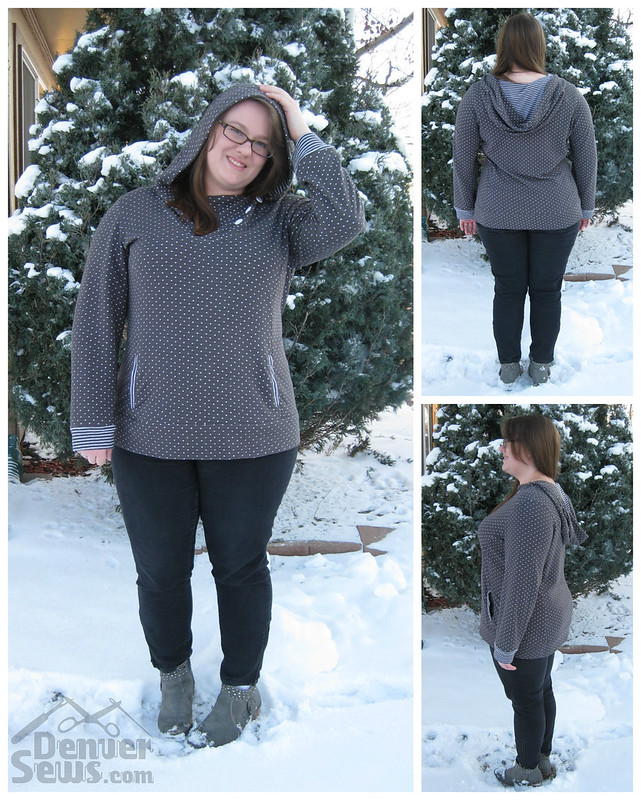 This is the recently released Jasper Sweater by Paprika Patterns. (Full disclosure: I received a copy for free in exchange for an honest review.) I made it up in a rayon double knit from JoAnn’s. The pattern calls for a stable heavy weight knit (sweatshirt fabric, basically) but this is a little bit stretchier than recommended because of the high rayon content. I made View A – the pattern also has versions for a longer dress version and a turtleneck instead of the hood. 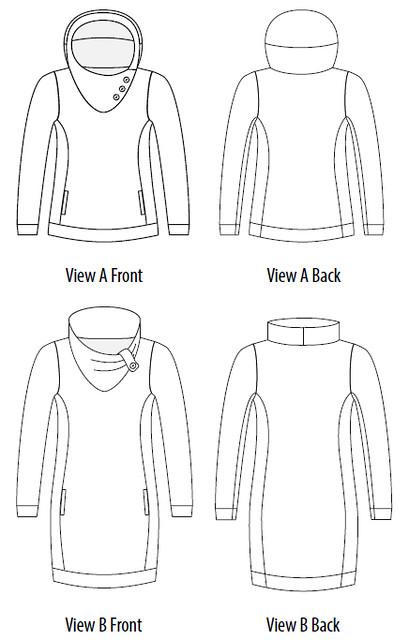 The double knit I used is also double sided with a polka dot on one side and a stripe on the other. I thought it would look cool to have the striped side exposed in the hood like this: 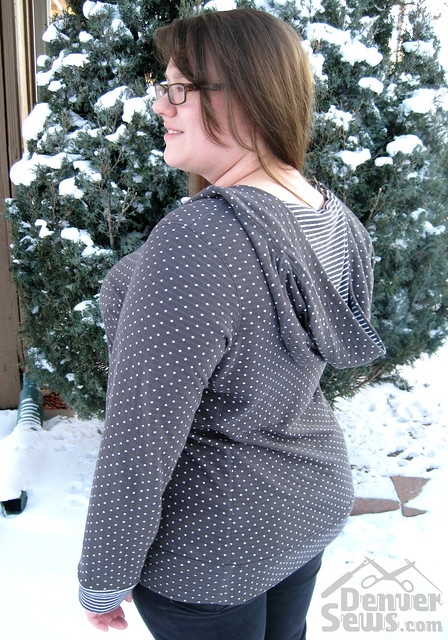 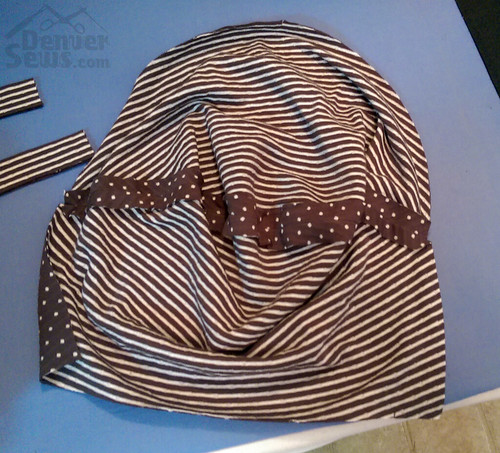 There were a lot of things I liked about this pattern:

The sizing was spot-on. I used the size 7 for the bust and then graded out to the size 8 at the hip. (I’m pear shaped.) The only other alteration I made was to shorten the sleeves by 3 inches, but that’s standard for me. Another thing to like about this pattern: the sizes 7-10 (41″ to 49″ bust) are graded for a C cup. (Sizes 1-6 are graded for the standard B cup.) I hate how Big 4 patterns are graded for a B cup in every size. Almost nobody my size wears a B cup! 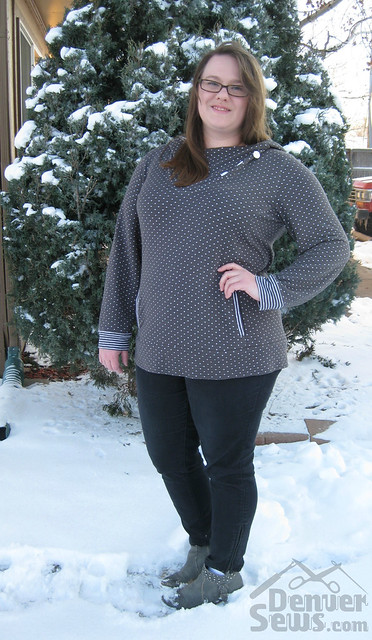 The only thing I disliked about the pattern was the width of the sleeves at the wrist. It’s really just a style preference, but I like my sweatshirts to have a cuff that’s tight on the wrist so they don’t feel drafty.

The instructions for the pattern were fairly thorough. The sections on sewing the welt pockets and the hood don’t have quite enough drawings to be crystal clear, but the pattern has a nifty little feature where each of the more complicated sections contains a tiny URL that links to a page on the Paprika website with detailed instructions and actual photographs of each step. If you don’t have a tablet or a smartphone beside you when you’re sewing, I recommending looking up the extra instructions and printing them out ahead of time. 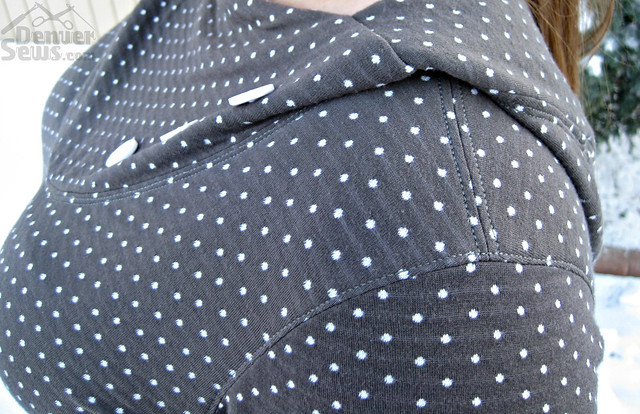 Above you can see all the topstitching I added using a triple stretch stitch. The pattern had several recommendations for finishing your seams on a knit, but I chose to topstitch the seam allowances down and then trim them on the inside with an applique scissors. Knits don’t unravel, so that makes things easy! By the way, have you ever topstitched a sleeve seam? It starts out seemingly sane, but the farther you go down the sleeve, the bigger this doughnut of fabric around the needle gets until you start panicking and thinking… why the heck am I doing this? 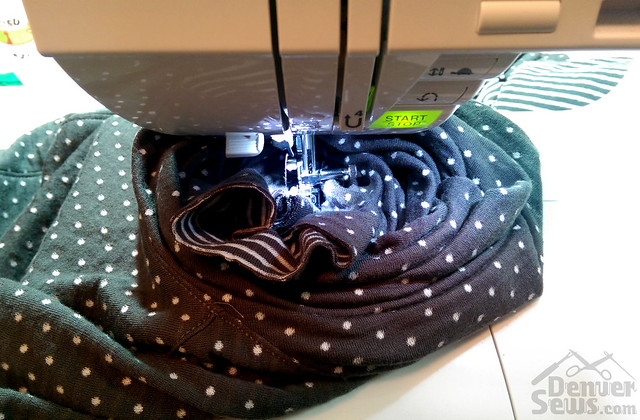 Here’s a shot of the sweatshirt inside out so you can see the seam finishing. Some of the seams I pressed to one side and others I pressed open and topstitched twice, which is why you can see the polka dots in some places but not others. 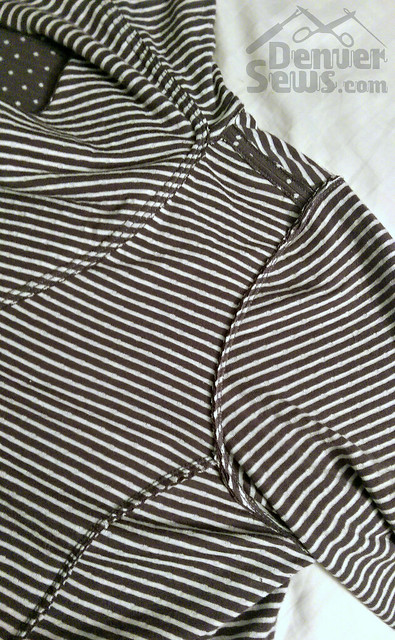 Making welt pockets in a knit was the trickiest part of this pattern, but that was mostly my fault for choosing to make the welt strip with the striped side of the fabric showing. If you’ve made this type of pocket before, you’d know that when you’re sewing, the welt strip is sandwiched between two layers of fabric (the sweater front and the pocket) so I couldn’t actually see the stripes to make my stitching parallel. I was just watching the episode of the Great British Sewing Bee where they were making boy’s vests with welt pockets and I have a sudden appreciation for the contestants that pattern matched their welts! I had to re-stitch these THREE times to get the stitching parallel to the stripes. 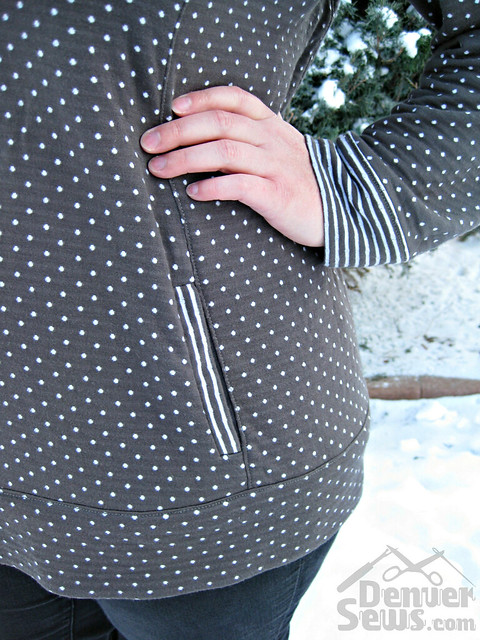 If you’re ever staring at a not-quite-perfect piece of sewing and debating whether to get out your seam ripper and do it over, I’ll let you in on my new sew-jo boosting secret… just imagine Patrick Grant looking over your shoulder. Would that wonky welt be good enough for Patrick? Or would he tell you to try again? 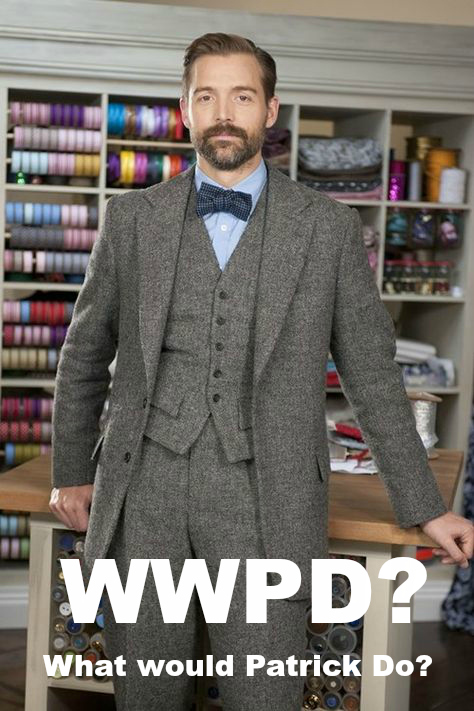 And now for the giveaway… Lisa of Paprika Patterns graciously offered a free copy of the Jasper Sweater/Dress pattern for one lucky winner – click the Rafflecopter link below to enter! The giveaway will be open for one week (midnight on March 2nd).

There’s also a 15% off sale on all Paprika Patterns ending today (Tuesday Feb 23rd) if you can’t wait. Check out their store here.