I had a plan for the the PatternReview.com “One Pattern Many Looks” contest to make up a bunch of Grainline Archer button-up shirts. I’ve made this pattern before and really like it, and I figured that since I wear blouses more than any other type of garment it would be a good thing to have several of. Now, Kitty tried to warn me that making up multiple button-up shirts in the span of a few weeks was a bit ambitious, but I was too stubborn to listen. And to make things worse, I chose this drapey silk-feel polyester that is perhaps the shiftiest fabric I’ve ever worked with. Seriously… I cut the button band exactly along the selvedge and by the time I lifted the pattern piece it was a crazy wiggly worm of a strip of fabric. Eeeesh. The reverse of the fabric has a ribbed look to it so I think perhaps the weave pulls it in a wavy line, because I swear I cut it straight!

I guess I’ll start with the good: I love how professional this pattern is. There are separate pieces for all of the interfacing pieces, the top button band is a separate piece which I think looks nicer than a built in button band, the collar is drafting perfection, and I love that it has sleeve plackets and cuffs. That maybe sounds like a lot of stuff to deal with, but with the Jen’s incredibly detailed sew-along I swear you can’t go wrong. My first attempt at sewing a button-up before this was a Simplicity pattern that turned out so horribly I didn’t attempt anything with a collar or buttons again for years. My first Archer went together perfectly without any issues. Well, maybe one issue. Would you believe I shortened the sleeves 3 inches, and they are still too long? I didn’t shorten the body at all and it is just right. I have a hard time imagining someone with my torso length but arms 3 inches longer! The cuffs are a little wide too so they don’t sit on my wrists, but I don’t mind because I usually wear my sleeves rolled up and the cuffs are the perfect size for the upper forearm. Next time I might taper the sleeve a bit more though because I’m not sure I like that much volume when it is down. (There are pleats at the cuff.) My other problem (which was entirely my fault) is that those patch pockets look horrible. I can’t figure out if it’s the shifty fabric or if I really pinned them on with a curved bottom, but I could have sworn I squared them with the button band when I was sewing. Ick. I was going to rip them off and redo them before taking pictures but… I don’t know, I got lazy. What do you think, do they need some interfacing to keep them from bagging, or is it just my bad sewing? Oh hey, you’re probably wondering what is going on with the back? No, that wasn’t part of the pattern. I had some inspiration photos filed away of open back button-up shirts that I wanted to try knocking off. Since the back is supposed to have a box pleat, all I did was leave the pleat unsewn for a couple inches extra length, then I hemmed the top of the back and only attached it to the yoke for about four inches on each side. Surprisingly that extra couple inches of length hangs down quite a bit. If you wanted an even bigger drape, theoretically all you would have to do is angle the back pattern piece along the fold line like this: 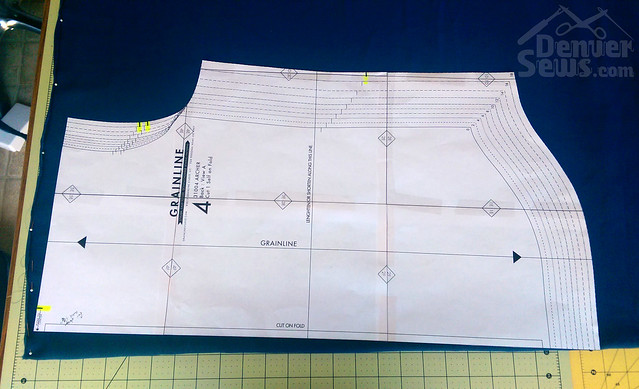 If you put it at a 45 degree angle you’d end up with something like the picture below. I’m not sure how you would wear a bra with that though… Here’s a closeup of the top stitching. Hey, if I just keep my hands over the bottom of the pockets everything looks fine! One more tidbit… I hate when button-ups gape at the chest because the buttons are space goofy, so here’s how I make sure that won’t happen. First, put the shirt on and put a pin at the widest part of your chest. The, er, nipple line if you will. Take it off and mark where you want the top button to be. In this case I used the collar stand. Then I use a Simflex gauge to expand between these two points and mark the rest of the buttons. Super easy. I laid the button hole markings that came with the pattern above and you can see that it’s almost the same.

So, the contest deadline is one week away and I have only one shirt with wonky pockets. Not sure I’m going to make it.