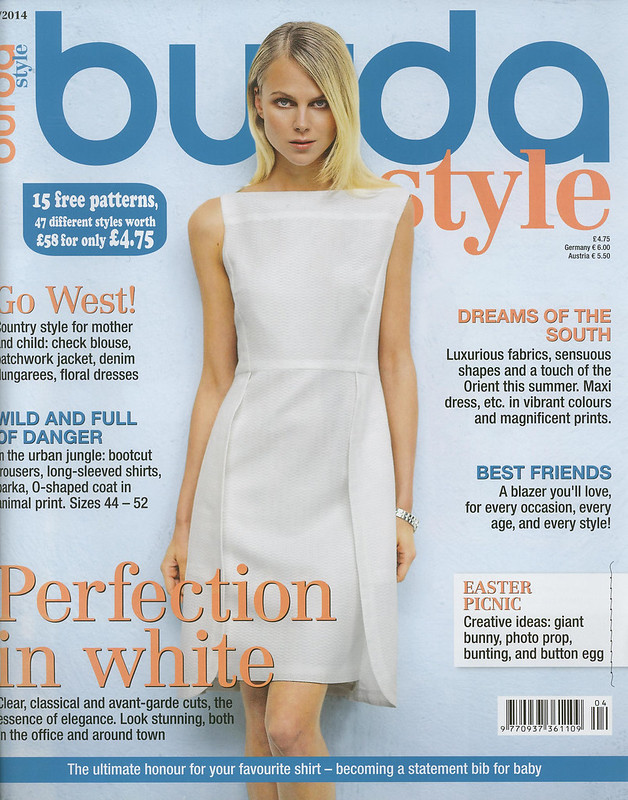 I thought this month’s issue of Burda was stellar. The features were varied enough that there were styles for everyone, and most of the looks were fairly original patterns I haven’t seen before. Let’s dive right in! My favorite pattern this month is this dress below with the crossover front bands. The fabric listed for the photo is a jacquard, and I think finding a fabric that looks slightly different at different angles is key to being able to see the front bands. I’m considering for myself whether it would work in a suede. Another option might be stripe or some directional print. Hmm, a ponte stripe sounds great too… do I need two of these dresses? I should also mention that this is a petite/short pattern. (Yay for me.) 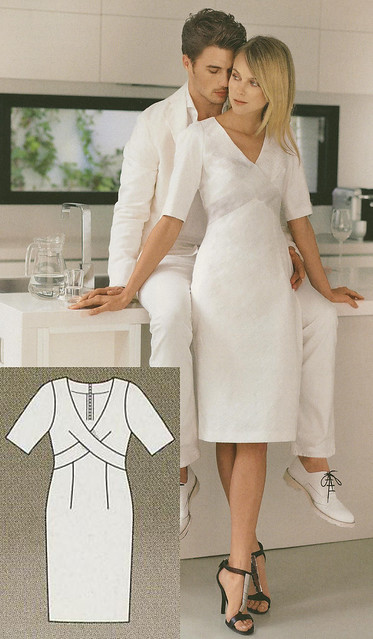 Here’s another shot of the dress on the cover. I got really excited about this pic in the preview at the end of last month’s issue, but now there are so many other patterns I like I’m not sure if I’ll ever get to this. I was worried that the flaps might be a second layer of fabric all the way around (which would really up the yardage needed), but I double checked the instructions and the back is only a single layer. The largest size takes less than 2 yards of fabric… oh no, I might be talking myself into it again. I’ll have to keep it bookmarked for when Burda has a bad month. 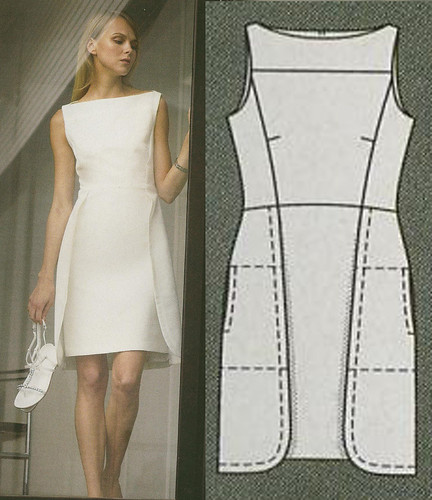 This jumpsuit is fabulous, but I could never wear it. Can’t wait to see somebody else make it though! By the way, if you are ever looking to see a Burda magazine pattern made up and don’t see it on the US site, head over to the Russian BurdaStyle site. Those Russian ladies are FAST at cranking stuff out. 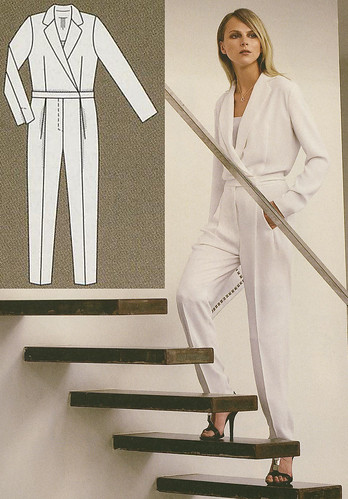 Next up there’s a sweater dress with a huge neck that falls around the shoulders. The description says that there is only one side seam – I wonder if this is another Pattern Magic knockoff? I like that it has darts to shape it a bit and set-in sleeves. You would really have to choose the right fabric for this or the neck could get unwieldy; the fabric in the photo is listed as “stretch cloqué”. Oh sure, I think I have some of that lying around! Really any tissue knit or thin, drapey knit should work. 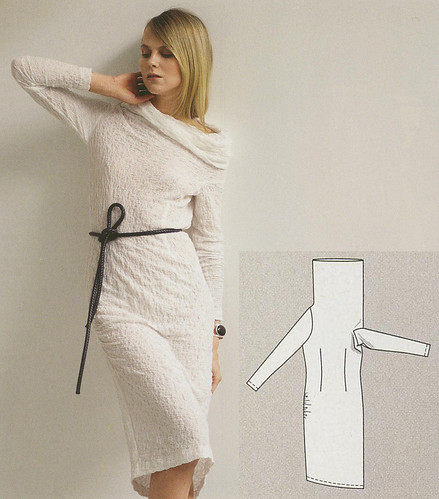 Occasionally Burda will throw in some men’s patterns, and in this issue we got a pair of trousers and a blazer. Usually I get a little excited to see men’s patterns because they come about so infrequently, but I feel like I’ve seen these before. I guess there are only so many different kinds of garments for men you can put out. You can also see the neck-tube sweater (as I am now calling it) shortened to a top here, and there is a nice looking high waisted skirt with welt pockets. 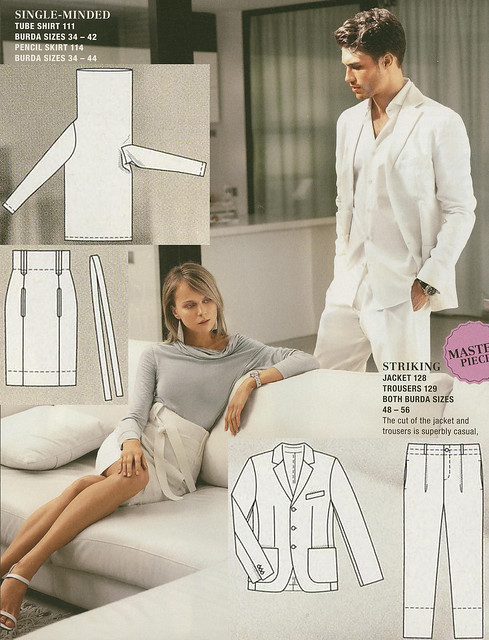 I LOVE this top, but it is very similar to the StyleArc Elizabeth top that I already have cut out. I think I like the shape of the hemline on the StyleArc top better, but maybe I’d like the Burda version more if it were longer? (Which wouldn’t be hard to do. And I think they knew I was going to complain it was too short because there is a note on the page saying “If the blouse is too short for you at the front, you can simply lengthen it until the midriff is covered.” Burda, you know me so well.) I do like that the Burda version has side darts. The pants looked pretty plain at first, but at second glance I noticed they close on the sides with buttons. If you’re into that kind of thing. 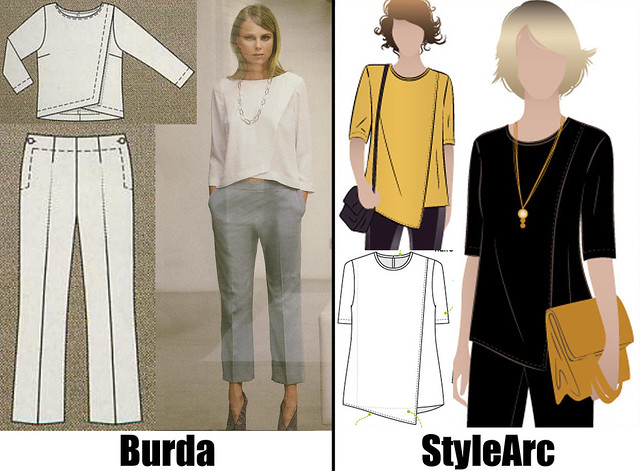 When I saw the dress on the left I thought “yuck, but the pattern lines are interesting”. The way it is bunching between her legs is really unflattering. Then I saw it again as a top and I loved it. I’m wondering if it has to be belted to look good, or if a lighter fabric choice would help? The brown one claims to be made of a washed silk which “allows it to fall and drape beautifully”. Hmm, I don’t know if I am looking at the same photo as whomever wrote that. The colorful version on the right is made from “viscose lavabel”… even the great Google couldn’t tell me what that is. The good news is that there are illustrated diagrams at the end of the newsprint section on how to put this one together if you can settle on a fabric choice. 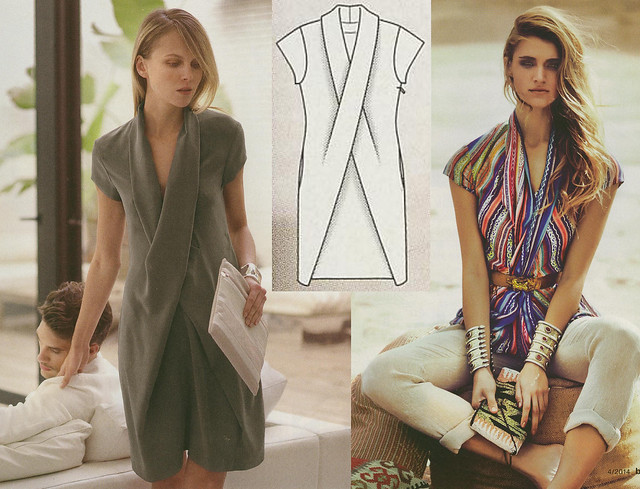 I got really excited when the preview for this month promised a feature on blazers, but sadly the feature consists of only two blazers photographed half a dozen times on different people. Meh. They are decent patterns but pretty standard. 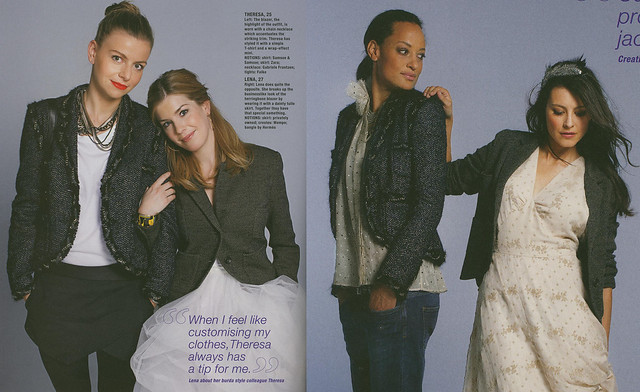 I do appreciate that they chose one of the blazers for the sewing lesson feature with colored construction illustrations. Last month was jeans, this moth a blazer… I’m glad Burda is stepping this up a bit and providing instructions on garments more complicated than a shift dress. They also have a step on how to make the trim on the jacket by wrapping chain around a piece of trim and hand stitching. Additionally there was a half page hint at the end of this on how to size a pattern up or down if it doesn’t come in your size. Wow, I’m kind of blown away by the amount of instruction in this issue! 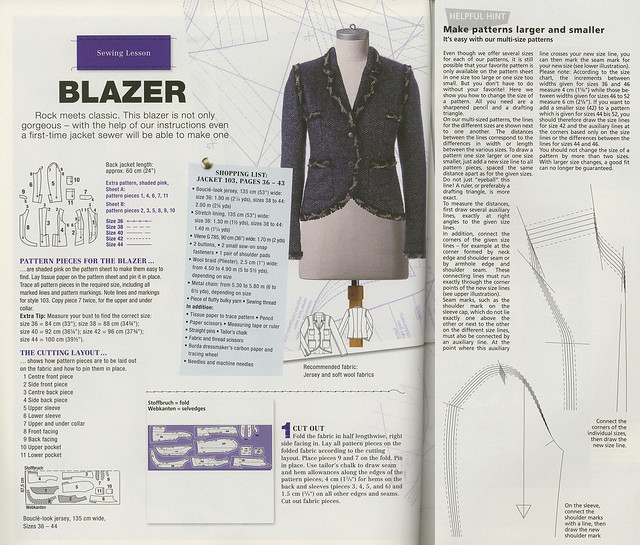 There was one other blazer pattern in a different feature that I like, so I feel appeased. I like how the collar on this goes pretty far down, almost like a tuxedo jacket, and then connects up with a low slung lapel. It’s a shape I haven’t seen before. I’m not going to say anything about what I think about it paired with those pants… 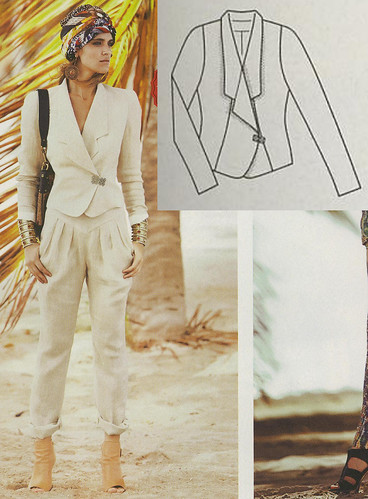 I’ve been skipping over the first feature in the issue which was retro inspired because it’s not really my style, but I think a lot of people are going to like this section. This blouse is nice and was also shown in a dress length. 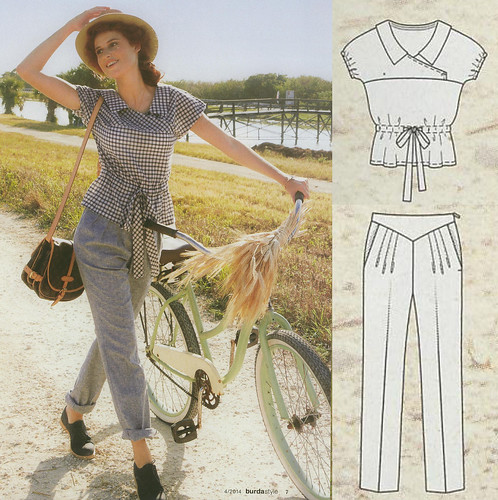 There were a couple patterns in the retro section with top stitched pieces around the neckline. I like the patterns but sometimes the stiffness the top stitching adds doesn’t pair well with a larger bust. The v-neck shape of this one might balance it out though – the girl on the right seems to be doing okay with it. I’m kind of surprised that the version on the left looks as good as it does made out of chambray… I would think that those gathers above the stomach stomach would poof out too much in that fabric. Maybe her pose is hiding the poofiness a bit? I’m just saying, if you’re going to attempt the same thing maybe do some test gathers first. 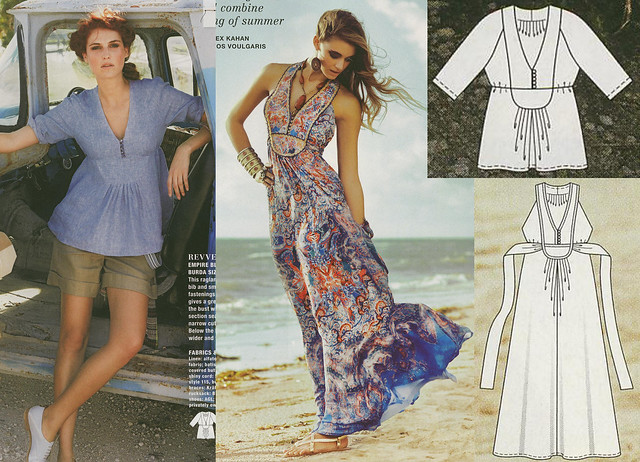 I wasn’t that excited about the plus size section this month, but looking back most of the patterns are pretty solid. I think the last issue and the special plus size issue were just SO GOOD that they’ve re-calibrated my expectations to be too high. This trouser pattern has a yoke around the top that they’ve done in leather. 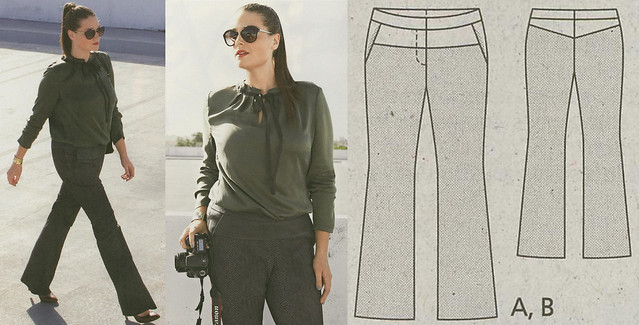 When I first saw the version of this pattern on the right I thought “hoochie mama”, but if you take away the leopard/sheer fabric combination I like it quite a bit. I bet the curved darts would make it fit especially well. 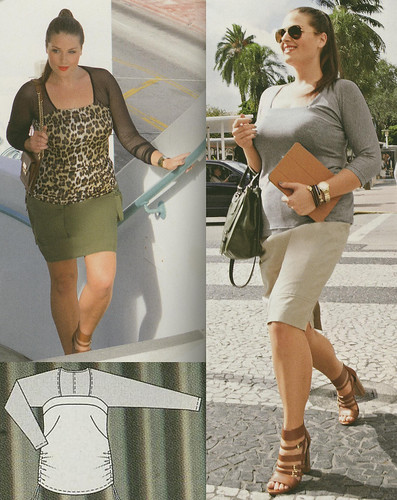 Finally here’s the preview for next month. I’ll give Jane three guesses about what I’m excited about for next month… what, I circled it in red already? Yes, CULOTTES! I have no idea why I’m so into the idea of culottes right now considering I’ve yet to make a pair, but with the warm weather lately it is bound to happen soon. 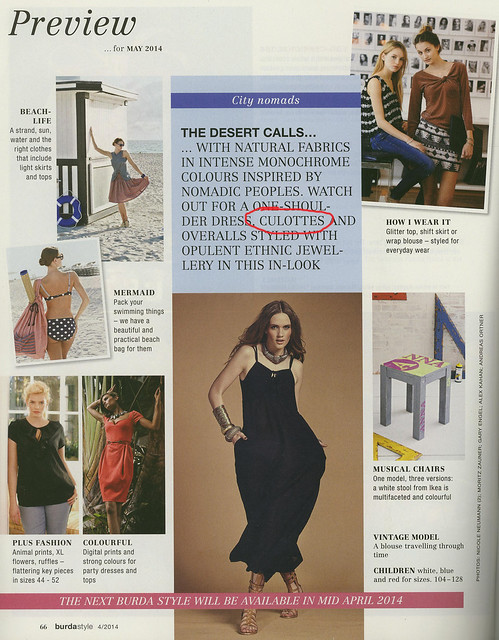